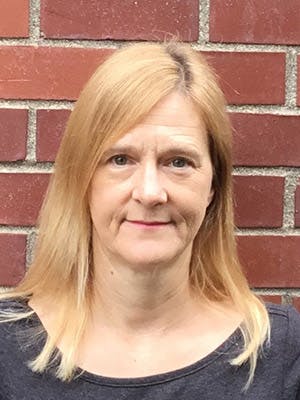 Originally from Australia, Susan earned her first Physical Therapy degree through the University of Sydney in 1987. Susan practiced in diverse clinical settings which included teaching hospitals and private practice in Sydney, Australia and Calgary, Alberta for seven years; after which she and her husband immigrated to the United States in 1994. While living on Oregon's southern coast, Susan practiced in acute care and earned her Doctorate in Physical Therapy (DPT) from Des Moines University in 2006.

Susan's family moved to the Stayton area in 2006. She worked at Salem Hospital in outpatient orthopedics and hand therapy until she joined our team at Pro-Motion Physical Therapy in 2008.

Her professional specialties include general orthopedics, hand therapy, and post surgical rehab. She continues to pursue her post-graduate knowledge through continuing education in Physical Therapy.

When not working with patients, Susan keeps busy with her husband, three grown children, two dogs, or at her gym.